Learn more about what PSA became:

What is Dynamics 365 Project Service Automation?

Project Service Automation (PSA) from Microsoft was an application to help organizations track, manage, and deliver project services. The application was intended to serve professional services companies from the initial sale all the way to invoicing.

Some of the capabilities it claimed to have include:

However, as of now, PSA is not available to license from Microsoft.

No. At this point, PSA has been incorporated into Dynamics 365 Project Operations. If you are seeking functionality that used to be contained in PSA, you now need to purchase Project Operations or find an alternative such as Project Business Automation from Adeaca.

What are the Capabilities of the Dynamics 365 Project Operations from Microsoft?

Most of the functionality previously contained in PSA and the D365 Finance project management and accounting module is now part of Project Operations. However, it depends what capabilities you need and how you deploy Project Operations.

For example, PSA was purely a CRM-based tool. Now some of that functionality resides in the ERP, Dynamics 365 Finance. Some capabilities are exactly the same, but some are different based on if you deploy with CRM, ERP or both. We have done an extensive analysis of Project Operations, what used to be D365 PSA in this whitepaper. Download it to learn exactly what you are getting with the new Project Operations in place of Project Service Automation.

Matt is a Vice President for Adeaca and is on a mission to create the Project Business Automation category in the market. He is leads Adeaca's thought leadership in project business. He has significant experience in high-growth ventures, helping companies gain awareness and position themselves as leaders in their industry.

What Generation is Your Project Business System? 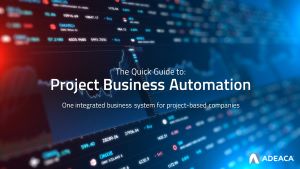